The two parts are positioned on top of each other in the final position and pressed together in a clamping unit. The upper part is transparent to the laser beam so that it can at least partially reach the weld seam. The lower part absorbs the laser beam and converts the irradiated laser power into heat.

The mechanical pressure and physical contact between the two parts causes the generated heat to be conducted into the upper part, so that the surfaces of both parts melt and mix. Since the penetration depth of the laser into the lower part is only small, the resulting melt zone typically expands only fractions of a millimeter into the parts.

As soon as the laser has left the welding point, the plastic melt cools down and solidifies into a strong, resilient connection. Since only little plastic has been melted, the cooling takes place quickly. Even directly next to the weld seam, the effect of heat is minimal.

Only the inner surfaces of the parts melt. The outer surfaces remain unaffected. The welding process therefore leaves no visible markings on the outer surfaces.
Since the melting of the plastic melt does not take place in air, there are no vapors or burns. Also, no material has to be melted off as with other welding techniques. This means that neither melt expulsion nor other particles can occur.

Depending on how the laser beam is steered along the welding seam of the parts, a distinction between the following process types is made

In addition to the normally used laser transmission welding, there are also a few special variants of the laser welding process, which are used comparatively rarely.

The heat-through process can be employed for two thin laser-transparent plastic foils. The laser beam passes through both foils, which lie on a laser-absorbing base. The base heats up locally and the pressure of the foils on the base also causes the foils to heat up as well. The lower plastic film is melted over its entire thickness, the upper film only on the lower surface. 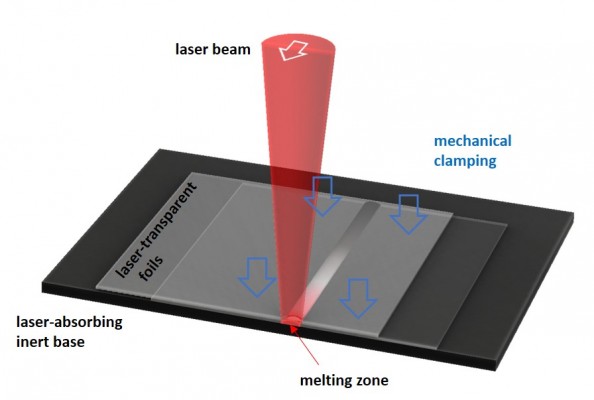 For thicker foils or parts, the heat conduction in the plastic is too low to allow welding by the heat-through method.
The ball optics is particularly suitable for the heat-through process, as it only applies the mechanical pressure locally at the position of the laser beam and thus allows large-area films to be welded together without a correspondingly large clamping unit.

Instead of using laser wavelengths of 800-1100 nm, for which most common polymers are transparent, longer wavelengths can also be employed. Above about 1650 nm most polymers have a weak self-absorption, which can be exploited.
In contrast to normal laser transmission welding, however, the laser is already absorbed in the upper part as well. By focusing the laser beam strongly on the weld seam, less laser energy is absorbed in the weld plane than at the entrance surface, but distributed over a much smaller area. Accordingly, the plastic melts faster in the weld seam than at the entrance surface. However, the melt zone in the upper and lower part are much deeper than in laser transmission welding. 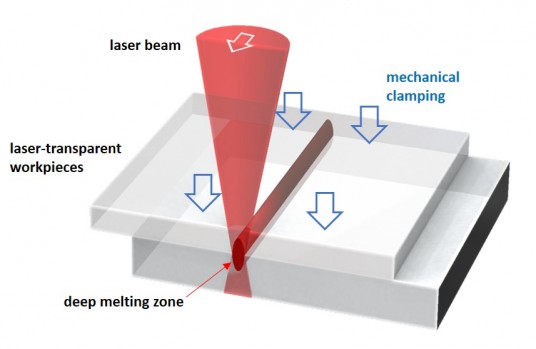 Since a much larger volume of plastic is melted and the laser beam is not completely absorbed, more laser energy per welding seam length must be applied. Since lasers with a wavelength of 2 µm generally have less power than those with 800-1100 nm, the welding speed must be reduced to a few mm/s instead of a few cm/s for normal laser transmission welding. In addition, lasers with a wavelength of 2 µm are significantly more expensive than those with shorter wavelengths.

The long wavelengths are used for special applications where no absorber for the normal laser wavelengths can be added to the base polymer. Most of these applications are in the field of medical technology.

Laser welding with wavelengths around 2 µm is not offered by ProByLas AG.

As with infrared welding, two laser-absorbing plastic components can be heated locally with a laser until the plastic melts on the surface. After switching off the laser, the components are rapidly rotated and compressed before the melt cools and solidifies too much.